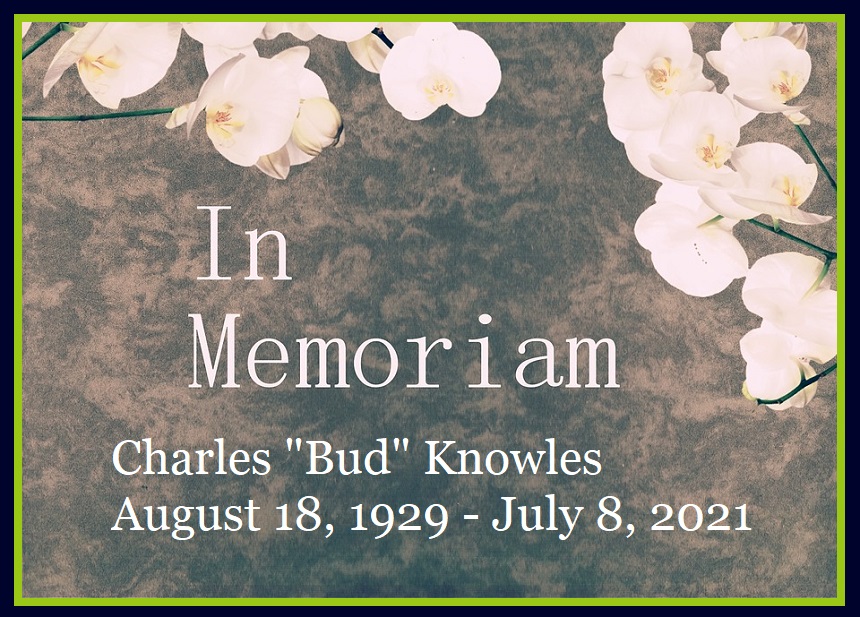 Knowles Was Entrepreneur,
IA Board Member

Charles (Bud) Knowles, founder of Wolf Creek, died July 8 at 11:30 pm in Dayton, Ohio, from complications of old age. Only six weeks before his 92nd birthday. A life well lived.

Bud is survived by his wife of 69 years, Jean Anne (Jan) Knowles; his oldest son Scott; his wife Jackie; and their children, Amanda Hamilton and Ben Knowles; along with great grandkids Harper and Hadley; his second oldest, Brooke Perin; her husband, Doug Perin; and their three daughters, Merideth, Logan, and Lily; his youngest son Chris; his wife Sue; and their two sons, Brannon and Trevor.

Bud was born August 18, 1929, in Wichita, Kansas, growing up on a small farm with his parents, brother Dell, and sisters Betty and Nancy.

Bud graduated from Wichita State University with an accounting degree, and immediately reported for duty as a draftee in the United States Marine Corp during the Korean War, serving with distinction. He was nominated to the Officer Candidate School (OCS) in Quantico, Virginia, and was commissioned as a Second Lieutenant, then stationed at Camp Pendleton in San Diego, California.

One evening at a dance at the Hollywood Palladium, he met his future wife, Jean Anne (Jan) Davidson. Jan had traveled to San Diego from Connecticut to visit friends. A long-distance relationship bloomed, with Bud making trips to meet Jan in Connecticut and New York City. They married in Connecticut in 1952 and their “honeymoon” was a cross-country drive back to Camp Pendleton.

After his time in the Marines, Bud joined the Federal Bureau of Investigation (FBI). Initially stationed in Newark, New Jersey, he was transferred to the Cincinnati office. Soon after he was moved to the Dayton, Ohio, office where, after a year as a field agent, he was promoted to the senior agent in charge of the Dayton branch. He was the youngest FBI agent to ever lead an office. Bud had the opportunity to meet with FBI Director J. Edgar Hoover, and a framed autographed photo of Hoover proudly hung on his office wall until this day.

Bud knew his next assignment would be at FBI headquarters in Washington, DC. He did not want to live near Washington and had become very comfortable in Dayton, so when he received his assignment, he decided to leave the FBI.

Thus, began Bud’s career as an entrepreneur. In 1961 he and Jan started the very successful Wolf Creek Garden Center. He was able to start a Saturday morning gardening talk show on the big local radio station, WHIO, and was a frequent guest on several Dayton TV shows, talking about landscaping — including several spots on the fledgling Phil Donahue show!

Bud was a builder and added many related services to the garden center business, full landscape service first, followed by an irrigation company. The irrigation business held special interest for Bud, and he added golf and agricultural irrigation and served on the board for the Irrigation Association. That board created the IA’s certification program. Bud built the largest irrigation business in a three-state area.

Bud’s success attracted the attention of irrigation manufacturer Rain Bird, who was looking to increase their presence in the Midwest. In 1979 Bud agreed to become the Rain Bird distributor. Selling off all other businesses, Bud focused on adding branches until Wolf Creek was in Pittsburgh, Cleveland, Toledo, Columbus, Dayton, Cincinnati, Louisville, and Lexington.

An offshoot of the irrigation business happened in 1996. The temporary pipe used in agricultural irrigation was discovered by construction companies who needed temporary fluid bypass piping. This was the beginning of a new business called Portable Piping. Not only did the business grow to serve all of North America, Bud and key man Jim Orban developed and patented innovative fittings.

Bud’s sons, Scott and Chris, became more active in the business starting in the 70s and 80s, and eventually taking ownership by the early 2000’s. By 2002, Scott and Chris assumed all operations of the business. Sister Brooke joined the business for several years in 2007. For many years, Bud would come into the office a few hours a week to “see what’s going on” until he turned 85. On that day, he showed up, announced he was done, and cleaned out his office.

Woodworking was a casual interest that developed into a serious hobby over the past many years. Bud studied, joined groups, and earned certifications. He made wonderful furniture, including an ornate walnut desk for his wife. His granddaughter Logan caught his bug and now makes a living in carpentry.

A life well lived; Bud will be missed. As Dr. Seuss once said, “Don’t cry because it’s over, smile because it happened.”

Bud asked for those inclined to send flowers to instead donate to a charity of their choice, especially those serving military, police, and children. Cards can be mailed to Wolf Creek Company 6051 Wolf Creek Pike Trotwood, OH 45426.